With the 2020/21 Formula One season in full swing, I decided to watch the first two seasons of this series available on Netflix. I am an avid Formula One fan, and was elated to find that such a show existed – where multiple camera crews would follow F-1 teams throughout the 21 race season, whilst interviewing drivers & team principals and also uncovering some juicy drama within or in-between different teams. The first two seasons cover the 2018/19 and 2019/20 season of the FIA Formula One World Championship.

There were I ton of things that I liked about Drive to Survive. The show is a perfect in-between for die hard Formula One fans (such as myself) and casual Netflix viewers. It appropriately goes into technical details wherever necessary, while exploring some fascinating and authentic arcs of different personalities that we meet. You do not need to be a racing expert to watch this show – the writers make a solid effort to give viewers who aren’t racing enthusiasts sufficient context about the rules and regulations of competitive motorsport racing.

Drive to Survive provides some great insight into what’s going on within the heads of Formula One drivers and team principals such as  their ambitions and frustrations. This relates back to those arcs I was referring to in the previous paragraph. An arc that I particularly enjoyed was that of Max Verstappen (a driver for the Red Bull Racing Team) in the first season. We saw his determination and desperation to win every single racing session – whether it be the actual race or just a practice session, no matter what the cost. We also saw how this desperation of his led to him underperforming in one of the races.

Max Verstappen (left) and his father (right), who was a former Formula One driver. Fun Fact: Max is the youngest race winner in Formula One history – he was only 18!

This show also changed my perspective on some of the drivers, such as Esteban Ocon and Sergio Perez. I never knew of Esteban’s’ humble upbringing or Perez’s relationship with Mexican billionaire Carlos Slim, whose financial support helped Sergio to keep his seat for the Racing Point team. Esteban and Sergio aren’t drivers that race for top-tier teams – they don’t get as much media attention as Max Verstappen or Lewis Hamilton. Therefore, the fact that we get a glimpse into their lives (literally by going into their houses, watching them train, digging into their childhood etc.) was something that I really liked about this show. Drive to Survive gives attention to every driver on the grid.

On the technical side, the cameramen and editors smashed it out of the park. I have nothing negative to say about the production value of this series. The races were covered spectacularly with dynamic camera angles giving me a sense of anxiety about when or if a crash/overtake was going to happen. The roaring sound of the 1.6 four stroke turbocharged V6 engine was also a common occurrence, adding to the excitement in the races. 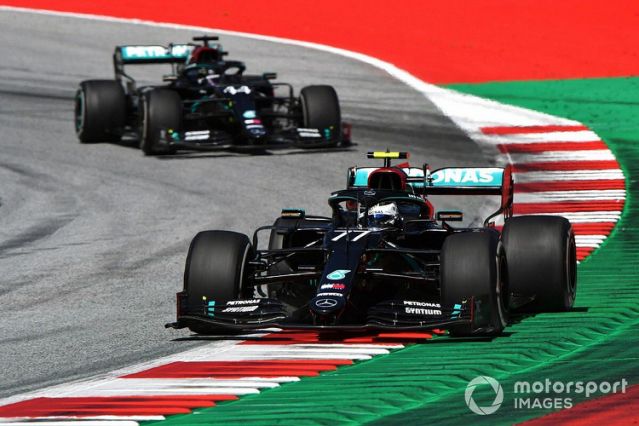 2020 Mercedes Petronas AMG car fitted with 1.6 L V6 turbocharged engine. The livery of this car is a nod to the BLM movement. Fun Fact: this team has won SIX championships in a row.

The chronological order of this series was not what I expected. I expected the episodes to be consistent with the season calendar. The series structures each episode by focusing on a driver/team principal and reviewing a difficulty that they are facing, in the context of a race in the season calendar. However, from episode to episode we jump between different races that occur during different times in the race calendar. This isn’t necessarily a negative and I do understand why the series chose to do this – yet it is very noticeable for true F-1 fans.

I didn’t find there to be too many negatives in this show. However, I do have some suggestions to make. The first season crucially missed out on showing one of the most exciting races of that season; the Chinese Grand Prix, where driver Daniel Ricciardo had a fantastic race – finishing in 1st place through godlike overtaking. The first season also missed out on covering other interesting story arcs such as the cult-like following Kimi Raikkonen has (he is the most fascinating driver on the grid imo) or the rivalry between Sebastian Vettel and Lewis Hamilton – two drivers that were fighting for their fifth world title in that season.

Kimi Raikkonen (right) and The Stig from Top Gear.

I would’ve also liked it if the series spent more time on the technical aspects of designing and racing an Formula One car. For instance, the show could’ve interviewed the pit-stop crew of different teams to see how they trained for their jobs or how they felt after a successful/unsuccessful pit-stop. I would’ve also like to hear some testimonials from engineers within the different teams to learn more about what they do to make a car more aerodynamically feasible. Racing is about the vehicle and the driver, and I feel that this show spent a tad too much time on the driver and not enough time on the vehicle.

In summary, Drive to Survive is an outstanding series from start to finish. It is a show that will undoubtedly admired by most people that watch it – whether they may be a racing fan or not. The first two seasons feature excellent technical cinematography and sound mixing that help us relive the most exciting races of the seasons, and some heartfelt and intriguing story-arcs. I know for a fact that this series is going to be revived for another season, and with everything that’s happening in Formula-1 right now; Drive to Survive Season 3 may be its best yet.